The average American consumes about twice as much protein as needed.  You can significantly improve your health and the health of our planet by cutting your beef consumption by half, or cutting it out of you diet completely. Worldwide, beef production contributes more to climate change than the entire transportation sector.  Climate emissions generated by the food supply chain can be cut by 25% just by eating more pulses, fruits and vegetables, and by reducing meat consumption.

The Environmental Impact That Isn’t Talked About

Curbing the world’s huge and increasing appetite for meat is essential to avoid devastating climate change, but governments and green campaigns are doing nothing to tackle the issue due to fears of a consumer backlash.  Rob Bailey, in a research report from Chatham House on “Livestock – Climate Change’s Forgotten Sector”, writes “Recent analyses have shown that it is unlikely global temperature rises can be kept below 2 degrees C without a shift in global meat and dairy consumption.  Greenhouse gas emissions from livestock are estimated to account for 14.5% of the global total.”

The report builds on recent scientific studies show that soaring meat demand in China and elsewhere could tip the world’s climate into chaos.  Methane emissions from livestock, largely from digestive fermentations causing burping cows and sheep, as well as methane and nitrous oxide from their manure and fertilizers used to produce feed, currently make up almost 15% of global emissions. Beef and dairy alone make up 65% of all livestock emissions. 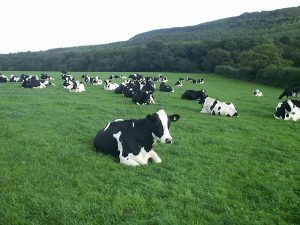 The global livestock industry produces more greenhouse gas emissions than the entire transport system, but a worldwide survey by Ipsos MORI finds twice as many people think transport is the bigger contributor to global warming.  This information is widely available, but governments seem to be very unwilling to pursue policies or disseminate information in order to encourage a change in consumer choices, perhaps reluctant to appear as though they are intruding into people’s live telling them what to eat.  The “Awareness Gap” is pointed to as a significant barrier to change regarding this problem and it is important that people understand the connections between beef production and climate change.

In the U.S. where beef consumption is one of the highest, a recent study showed that raising cattle requires 28 times as much land and 11 times as much irrigation water, and pumps at least 5 times as much planet-warming gases into Earth’s atmosphere than that of producing the equivalent calories of dairy products, poultry, pork or eggs.  Because of the increasing need for grain to feed cattle at factory farms, deforestation is increasing in many parts of the world in order to clear land to grow grain.

And the appetite for meat is climbing as global populations and affluence rise.  More and more people are able to afford meat. Meat consumption is on track to rise 76% by 2050, and dairy 65%, compared with 40% for cereals. By 2020, China alone is expected to be eating 20 million tons more meat and dairy each year.

The good news, according to an online survey in Brazil, China, and India is that people in these developing countries are very receptive to changing their consumption habits in light of the climate change impact.   This is in contrast to those in developed countries, where meat and dairy eating is highest, and awareness of livestock’s impact on the climate is low and willingness to change is low.

A plant-based diet, which emphasizes fruits, vegetables, grains, beans, legumes and nuts, is rich in fiber, vitamins and other nutrients. And people who eat only plant-based foods — aka vegetarians — generally eat fewer calories and less fat, weigh less, and have a lower risk of heart disease than non-vegetarians do.  Just eating less meat has a protective effect. A National Cancer Institute study of 500,000 people found that those who ate the most red meat daily were 30 percent more likely to die of any cause during a 10-year period than were those who ate the least amount of red meat. Sausage, luncheon meats and other processed meats also increased the risk. Those who ate mostly poultry or fish had a lower risk of death.

Red meat — including beef, pork and lamb — has been linked to an increased risk of colorectal and prostate cancer. Researchers believe the iron and fat in red meat may be responsible, according to the National Cancer Institute.

How much protein do you need?  The fact is that most people in developed countries get enough protein in their diets, and the average American eats twice as much as needed. Adults generally need 10 to 35 percent of their total daily calories to come from protein. Based on a 2,000-calorie-a-day diet, this amounts to about 50 to 175 grams a day. Of course, this protein can come from sources other than meat.

Eating less beef but better quality can be more satisfying, and will help decrease global emissions.   Compared to factory farmed meat, sustainable meat from animals raised on pasture contains less fat, fewer calories, and higher levels of essential omega-3 fatty acids, vitamin E, beta carotene, and other important nutrients.  Sustainably raised meat is also produced without the use of growth hormones, nontherapeutic antibiotics, or feed additives that are unhealthy for the public consumer. 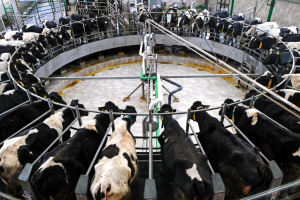 On sustainable farms, animals are treated humanely.  They are able to graze on pasture, carry out natural behaviors, and live without undue stress or cruel treatment.  The digestive system of cows, goats and sheep are best suited for high cellulose plants like grass, whereas their typically grain fed diet in factory farms can easily cause disease and fatalities. Factory farms crowd livestock into small, enclosed buildings where contaminated, unhealthy conditions lead to excessive stress and widespread disease.  They are given feed formulated to speed their growth and supply them with essential nutrients, while minimizing costs to operators.  Recent studies have shown that chemical additives in feed may accumulate in animal tissues, potentially exposing consumers to unwanted chemicals such as veterinary drug residues and heavy metals.

The problem is that it is more expensive to raise animals sustainably than to mass-produce them on factory farms that are subsidized by your tax dollars and therefore produce cheap meat.  But the expense is still there.  Consider this: