Plastic is one of the most toxic, yet ubiquitous, environmental problems on the planet. It leeches into the bottled water you drink, into the oceans, and the landfills. A single water bottle takes over 1,000 years to decompose, yet only 1 in 5 bottles are recycled. Of the 50 billion water bottles consumed each year, about 30 billion of them are in the U.S., so this is not primarily a problem in developing countries where they often do not have drinkable tap water.

The U.S. consumed 9 billion gallons of bottled water in 2008 (and average of 30 gallons per person), and you can bet that it hasn’t decreased from there. At last count, there are about 50 billion water bottles consumed each year worldwide, and 30 billion of them are in the U.S. That is 1,500 water bottles consumed per second in the U.S. alone. And bottled water cost about 2000 times more than tap water. As Annie Leonard says in the Story of Bottled Water: “Can you imagine paying 2000 times the price of anything else? How about a $10,000 sandwich?” How did this happen? 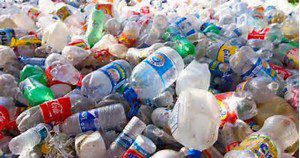 It is interesting to note that the marketing of bottled water took off in North America in the 1990s, at the same time when cigarette smoking, the fast food industry and the soft drink industry were coming under fire for promoting unhealthy lifestyles. By 2011, the profits from the bottled water industry were more than $86 billion.

Bottled water manufacturers may say that they are just meeting consumer demand. But why is there this demand? The first marketing tactic – scare people into not drinking tap water. The idea is that bottled water is cleaner and safer than tap water, yet tap water in most cities in the U.S. has been found to be better for your health than bottled water. Plastic leeches hormone disrupting such as phthalates and BPA into the water. Regulations for bottled water are less stringent than for city tap water. In most large cities, tap water must be disinfected, filtered to remove pathogens, and tested for cryptosporidium and giardia. Bottled water is not required to do so.

The second marketing strategy – seduce the customer into thinking bottled water is associated with health and status, using pictures of pristine nature and clear mountain springs and marketing “premium” bottled water. But nearly half of all bottled water in the U.S. actually comes from the tap. Pepsi’s Aquafina and Coke’s Dasani are two of the many brands that are really just filtered tap water.  Read about the report by Food and Water Watch here.

And the third strategy – use misleading slogans. In a full-page ad, Nestlé said: “bottled water is the most environmentally responsible consumer product in the world.”

It takes three times the amount of water to make one bottle of water than it does to fill it. 17 million barrels of oil every year are used to produces the bottles. To put some perspective on that, it is the amount of oil needed to fuel one million cars for one year.

But bottled water is not just a drain on resources but after that water is consumed, the bottles leave behind a huge toxic problem. 80% of the water bottles bought end up in landfills. In the US, our recycle rate for PET plastic bottles is about 23%, so we throw away 38 billion water bottles each year. Doug James, a professor at Cornell University, estimates that that leaves 25 billion bottles “landfilled, littered or incinerated”.

Water bottles are made of completely recyclable polyethylene terephthalate (PET) plastic, but PET does not biodegrade, it photodegrades. That means that it breaks down into smaller and smaller fragments over time, and takes centuries to decompose. This means the fragments sit around contaminating our soil and polluting the water, absorbing toxins and sickening farm animals. 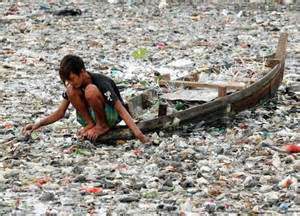 From the Story of Stuff: “I was curious about where the plastic bottles that I put in recycling bins go. I found out that shiploads were being sent to India. So, I went there. I’ll never forget riding over a hill outside Madras where I came face to face with a mountain of plastic bottles from California. Real recycling would turn these bottles back into bottles. But that wasn’t what was happening here. Instead these bottles were slated to be downcycled, which means turning them into lower quality products that would just be chucked later. The parts that couldn’t be downcycled were thrown away there; shipped all the way to India just to be dumped in someone else’s backyard.”  Hear more at the Story of Stuff.

Plastic bottles are the most prevalent form of pollution on beaches and oceans. The Ocean Conservatory estimates that for every square mile of ocean, there are over 46,000 pieces of plastic floating in it. 10% of all the plastic manufactured worldwide ends up in the ocean, most of it settling on the ocean floor where it will never degrade.

Plastic in Our Bodies

It’s not just about cost in dollars, the cost to the environment, but the cost to our health too. BPA and phthalates have been widely researched and are two of the many chemicals that end up in your body from plastic, and are linked to major diseases such as cancer, heart disease, diabetes, ADHD and infertility. Phthalates leech into bottled water after as little as 10 weeks of storage, and faster if bottles have been left in the sun or stored in a warm environment.

The FDA does not regulate phthalates or class them as a health hazard due to the supposedly minute amounts present in plastic bottles. This decision does not take into account the significant presence of plastics in the average American citizen’s daily life, the fact that phthalate concentration increases the longer a plastic water bottle is stored, or the fact that a bottled drink that is exposed to heat causes accelerated leaching of harmful plastic chemicals into the drink.

In addition to the negative impacts of BPA and phthalates on human health there are also growing concerns regarding carcinogens and microbial contaminants that have been found in test samples of bottled water.

Bottled water is simply NOT cleaner and safer than most tap water.

So what do we do? Start by making a commitment to not buy or drink bottled water unless the water in your community is truly unhealthy. There are a couple ways to check out the quality of water in your city. EWG (Environmental Working Group) rated big city (population over 250,000) water utilities based on three factors: the total number of chemicals detected since 2004; the percentage of chemicals found of those tested; and the highest average level for an individual pollutant, relative to legal limits or national average amounts, including for the most common pollutants (disinfection byproducts, nitrate and arsenic). You can search your city here:

Under the “right to know” provision in the drinking water law in the U.S., all tap suppliers must provide annual quality reports to their customers. The water utilities must mail each household this “Consumer Confidence Report,” each year before July 1 by law. The report details where your drinking water comes from, what contaminants have been found in it, and how contaminant levels compare to national standards.

You can also test your water yourself. Standard consumer test packages are available through large commercial labs at a relatively reasonable price. Call EPA Safe Drinking Water Hotline at 800-426-4791 for a list of contacts.

If your water comes from a private well, it’s not regulated at all by the EPA, so you should have your water tested annually in late spring (when pesticide runoff will be at its worst), and anytime you notice a change in your water.

A home water filter is a good way to ensure you are drinking healthy water. There are many types of filters and come in a huge price range. Some chemicals may or may not show up on water test reports, such as chlorine, a suspected respiratory and neurological toxin, or chloramine, a suspected blood and respiratory toxin. A simple carbon/KDF adsorption filter works well for this contaminant, but it is best to check your water report to see what kind of filter is needed.

Ultimately, the solution needs to include both improving our water systems and preventing the pollution that contaminates them. We need to demand investment in clean tap water for all. In the US, tap water is underfunded by $24 billion partly because people believe drinking water only comes from a bottle! Around the world, a billion people don’t have access to clean water right now. Yet cities all over are spending millions of dollars to deal with all the plastic bottles we throw out.

So if you haven’t already: